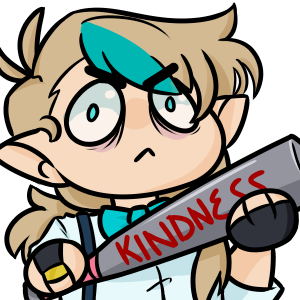 FrankiiSlime is a male VTuber who plays various games, most days of the week. His schedule is fairly random. He prefers to keep a positive space in his streams and as a place people can just relax, though it is still largely a mature setting (language). Not a very lore-heavy VTuber.

Slime was an unnamed, minor god in his world, a god who ruled over Athatry Grove, a forest that was primarily home of slimes. But as adventuring grew more popular, the forest got more foot traffic, and the slimes the god was supposed to watch began to fall to the humans' weapons. One night, he went into the nearby village and began to rid the world of the adults in that village, leaving only the kids and elderly. His slimes couldn't protect themselves, so he would stop them from being attacked. His actions caught the attention of the older and more powerful gods. Merciful as ever, they would protect the forest, but exiled the unnamed god to this world, leaving him to fend for himself. He stole his name from a passerby, going by Frank, or later Slime as well, and he started to build a crime empire, promising a home for all of the outcasts.