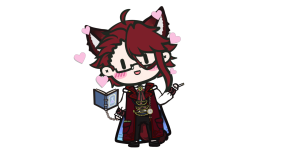 Escha is an English Red Panda Alchemist VTuber along with his autistic daughter cutely named mini who invades streams often. He is a variety streamer but focuses alot on Colony builders, City Builders and Management games naming people and places after his viewership.

A genius alchemist from the rogue town of Lyheri. Her sharp mind, strong will and seductive body allowed her to impose herself as a significant player in the city, but she was tricked into creating an army of monsters for a crime boss. After witnessing the deaths of many innocents, she fled, saving the only life she could at that time. Consuming the life of a passing red panda, she turned the little girl and herself into hybrids to survive. After finding solace in the city of Encenton, she worked on perfecting her philosopher stone to gain power and be able to avenge all those she let to die. It turns out this stone allowed her to change her appearance and start anew as a man, now living with the name of Escha Akaheart, and fuelled only by revenge.