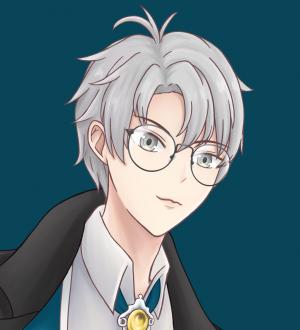 Eric is a prince VTuber who is also a member of Honey Quartet, along with his close companions, Avestia Calantha, Sorayah Ler Alyssa, and Glen Near Kusuma. He makes content both in English and Indonesian, in the form of gaming, free talk streams, and analysis videos.

Eric is a prince of Eternia, a fictional kingdom from a video game of the same name. He was your typical fantasy protagonist, destined to fight back against the evil that took over his kingdom through a rigorous journey across the land. Eric would go through this journey upon every playthrough, resulting in a sacrifice of his own life in order to save the realm. That's how the story goes each time, upon every playthrough.

Eric didn't know he existed within the boundaries of this video game until much later on, until someone, be it god or devil, granted him consciousness. Upon realizing that he was stuck without the boundaries of a game, Eric decided to break out and end the vicious cycle that destiny had laid out for him, making his way into the virtual realm.

Now residing in this new land, he continues to wander without a purpose, searching for a reason for him to live in this world. That was when he was recruited into the quartet, who he is now a part of.