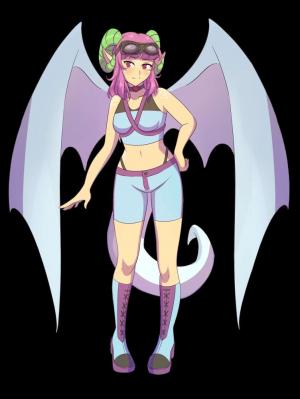 Elysara is a Virtual Streamer who makes content in English and German.

Elysara is a high-flying, excitable, and flirtatious dragon. She loves to talk and loves to game with friends even more.

Her favourite games tend to be rhythm games, and until she can't anymore, you can catch her playing drums frequently!

Elysara lives in a place called the Sanctuary Beneath the Sky, a small fortress carefully hidden by concealment magic. It has been her brood's home for millennia, and serves as a middle point between the Sky and Earth realms. The only things allowed in are her brood and contact with the outside world is limited.

Elysara has been a bit of a bit of a troublemaker her whole life. At a young age, she snuck out and was gravely wounded, leaving a permanent scar on her back and crippling her ability to use a breath weapon. As punishment, she was permanently tasked as a watcher and ward, secluded somewhat from her own people, and not allowed to leave by sacred laws and traditions. She spends her days watching over the lower realms, studying them, and being prepared to defend the Sanctuary and the Sky realms from any threats that may emerge.

Becoming increasingly bored with her quiet and mostly-peaceful role, she started reaching out to the people of Earth, finding ways to connect her equipment to the lower realm in order to communicate and interact, since her own kin don't trust her.