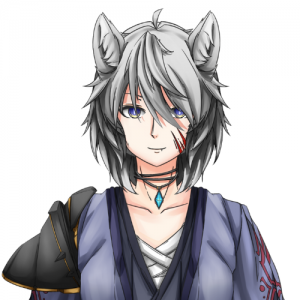 Fanta-C: 1st Generation | The Resurgence, Eibi Kusanagi is the 1st member of 1st Generation/ Wave of vtubers & vstreamers under Pearl Orient Production. He is specialized in commentating on games and bringing different entertainment content.

Eibi Kusanagi is a wolf named after the third powerful regalia of Japan. He used to live in Japan but in a different dimension. Wherein demons invaded the humans. Eibi Kusanagi was mutated by scientists of the human race to serve and protect them.

He was assigned to a division of Samurai Alliance to lead the members and defeat the race of demons and groups of rebellions. Luckily the human races were successful in regaining their lands with the help of mutated demi-humans like Kusanagi. After the long run of battles and war, Eibi Kusanagi retired to the alliance and traveled around the Asia continent to look for a new thing to do.

He met this other demi-human but, Kusanagi thought she was a different one. She has those glazing eyes, a fancy hat, and a dark-colored dress. He tried to approach the demi-human until he saw her up close. The demi-human that Kusanagi found said- at last I found you! and that's how everything started before Eibi Kusanagi became a member of "The Resurgence".