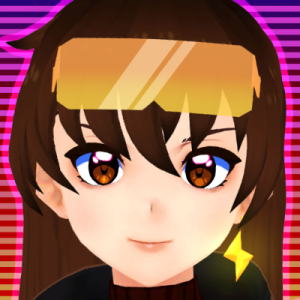 Drea is a partnered VTuber / VStreamer on twitch and a proud Weeaboomer. She's a variety streamer who primarily streams art but also a ton of random games.

She loves to play retro games/games on classic consoles such as the Dreamcast, N64, and PS2! She enjoys dabbling in console modding and restoration.

Her outfit is heavily inspired by things from the 80s and her favorite cartoon shows. Most specifically Back to the Future II, X-Men and Pokémon.

She likes to drink Mexican coke, eat snacks, and smoke.

She's hoping to teach her viewers Spanish even though she can't speak Spanish for sh*t.

The experiment backfired. The program used for the experiment had been overridden. Drea instantly gained all information on the Internet. Her previous life of gaming skills was then mutated into enhanced strength, endurance, extraordinary speed, agility, and wit.

Scientists didn't expect consciousness would also lead to free will. Instead of "reading" the data from the FDD and running the program Drea decided to run off and explore her new "mind" and environment. The experiment was moved into a room where it could be monitored and supplemented with power for years to come.

Over time, as funding for the lab had dwindled it was eventually forced to shut down. All experiments had to stay on lab grounds indefinitely. The building now remains abandoned, hidden by overgrowth, and strangely... still powered on.