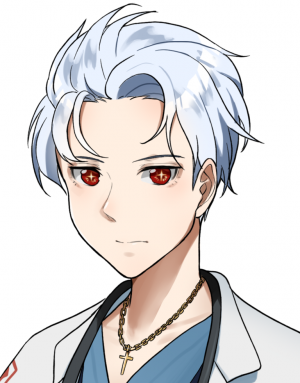 Dr. Gonz is a real-life medical worker who's decided to join the Virtual YouTuber club under the guise of being the personification of the holy grail!

A Quirky yet enjoyable individual to be around, he refers to his followers as his Righteous Sinners/Patients while his twitch & discord mods are referred to as his Medical staff-members/Nurses.

There seems to be a connection between him and another Vtuber in the works known as Lars Benito. Dr. Gonz is referred to as the 'V'irture in Vices Vs Virtues (otherwise known as Vices v Virtues or VVV) while Lars is known as the Vice. It's unknown if these two are apart of some sort of Vtuber group amongst themselves or not.

Not much else is known about the lore behind the character of Dr. Gonz, but he has mentioned before that once he hits 1,000 followers he'll publicly reveal more details!