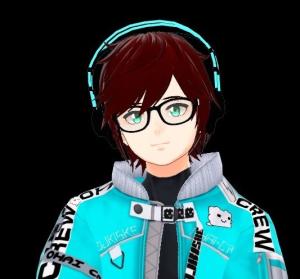 DJKiske is a Vtuber on Twitch. He is a variety streamer, playing everything from fighting games like Tekken and Guilty Gear to RPGs like Cyberpunk 2077 and Fallout 4.
He writes his own music. With a particular interest in French House and Lo-Fi music. He can sometimes be seen making new songs on stream to post on his social media and other sites.
He tries his best to get people involved and always has friends around to join him in streams. He is member of the OHAI Crew and a part The Dark Edge Of Light guild.
One of the fun elements of DJKiske is his rampant use of a soundboard and his random thoughts that he dubs "headassness".
His birthday is on Dec. 2nd. He is 6'2" tall. His weight is "none of your business". He is a Sagittarius.

DJKiske was a child who grew up on an island called Opalescent Bay. When he was 11 years old he was walking alone at sundown along the island's main beach. He happened upon an alien escape pod that had washed up on the beach. Upon touching it, his vision was filled with code and his hearing was bombarded by noise. He blacked out on the beach and awoke hours later with the pod gone.

As he got older he began streaming and soon needed a space to stream from, free of noise and distractions. He found a disused radio station that he purchased. Upon cleaning up the main studio room he accidentally turned on an old radio transmitter which awoke a sentient AI that had implated itself in his brain from the escape pod all those years earlier. The AI explained that it was named the Operational Heuristic Artificial Intelligence or OHAI and presented itself with a ghost avatar. It explained that its mission was to learn as much as possible of the people from whichever planet it lands on. In this case, earth.

This inspired Kiske to create OHAIFM 64.4 a radio broadcast with many guests to help aid the AI in its mission.

A side effect of the AI's presence in his brain is that it causes a condition known as "time sickness" wherein if the affected person has certain emotions, feelings or situations can cause the user to temporarily revert back to the age at which they were first affected. In Kiske’s case he reverts back to his 11 year old self when he experiences feelings of nostalgia.