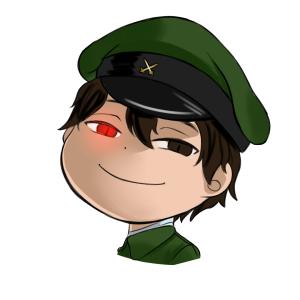 An English Dictator Vtuber who loves FPS shooters and caffeine.

Born and raised within the walls of the Republic, Richard typically kept to himself. After a participating Supersoldier experiment, Richard gained the ability to use dark magic which he used to his advantage while in combat. Years later after discovering a terrible secret about the leader of the Republic, Richard gathered up as many people as he can and fled the Republic to start his own nation. The Republic after hearing of Richard's desertion took it upon themselves to take down his nation, they cut off access to any resources that were used to keep his citizens alive and healthy and attacked his nation to weaken them and cause the nation to come crumbling down.

One day Richard received a letter from a neighboring nation called the Régime. They offered to help Richard if he were to allow them to annex his nation, in return, they would allow him to join their council and access the resources required to help keep his people alive. Having no one else to turn to Richard accepted this deal. After becoming one of the council members Richard was given the nickname Dictator by his peers due to the way he ruled over his nation and because of his role as the representative of the Régime, As the representative, he is to distort the truth of what the Régime truly is and make himself appear to be the leader to whoever he interacts with. Decades later while drinking at an underground bar, Richard met an android. They struck up a conversation talking about their lives and soon the topic of streaming came up, the android talked about how she streams as a way to make others happy. This inspired Richard to take up streaming in hopes to recruit new members for the Régime and becoming the next best Vtuber.