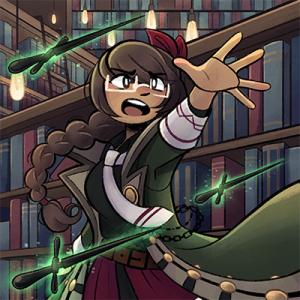 Di is a Witch-Hunter turned VTuber that interrupts stream to talk TRPG/D&D design and GMing. She mostly streams whatever video games she cares about, but will always take a break to talk Tabletop RPGs. Is a known chuuni-weeb-fujoshi, and spends too much time tweeting at Japanese Twitter users. Her birthday is August 3rd. Her height is 172 cm (5'7). Her zodiac sign is Leo.

Di was a normal girl interested in witchcraft when she accidentally opened a portal to a fragment—a pocket dimension ruled by a witch. The witch tormented and tested her for 120 years until Di eventually bested, killed, then ate the witch for her powers. Fueled by 120 years of frustration and regret, Di became a witch hunter, traveling fragment after fragment to bring witches to justice. At 900, she finally calmed down enough and is currently on an extended hiatus in order to focus on making tabletop rpgs and stream.