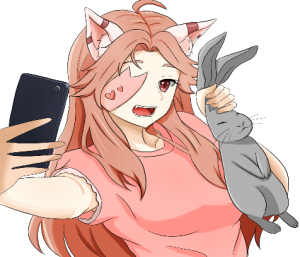 DezzaChu is a 23 year-old Arctic Wolf VTuber. Came from Alaska and was outcasted from her old pack for worshipping the god of dawn which her family and all wolves disapprove of.

A chorus of baying wolves greeted the full moon’s rise. The animals leaped over each other and loped over the arctic snow in savage ecstasy. They sang their praises to Luna, that great silver goddess in the sky. They exalted her as their mother, for it was she who blessed them with their white coats and night-seeing eyes. I ran with them, too, but I could not join in their song. I had never once been able to. From the day I’d been born, I’d been cursed with the inability to howl at the moon. When I tried, splitting headaches would tear my mind apart. It was as if I was being punished. No one knew why I couldn’t sing with them. It was believed that all wolves were born to Luna, just as every creature on Earth was born to one god or one goddess, and no other. “The deities don’t mix kin,” some of the older wolves used to say. They were wrong. I didn’t know it then, nobody did, but they were wrong. You see, my name is DezzaChu. I was born not of Luna, but of Aurora, goddess of the dawn. I have one red eye and one blue eye, representing the colours of the Northern Lights. My fur, too, was soft and white like my brothers and sisters, but my eyes were strange, as was my inability to howl at the moon. There were other things about me that were different, too, but these would emerge only later. I am the first wolf of my kind. As far as I know, I’m the only wolf of my kind. This is my story.