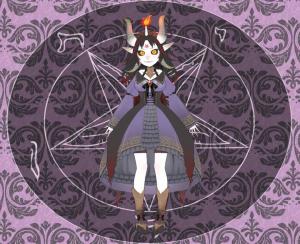 She is the Goth Loli digital manifestation of the great Baphomet. it'll be the funnest time in Hell, with her! She may sound cute n sweet but don't be fooled she is a demon after-all. She loves anything spooky, horror themed. Her fave types of games of course are geared towards that, but she will randomly play a variety of others at times. She occasionally does art and has a weekly Horror/gore movie review on Youtube!

The Goat is synonymous with Satanism. The horns represent the Horned Gods/Goddesses. Goats also symbolized fertility in many different cultures and times. The Goat as a symbol of fertility and focus of religious rites dates all the way back to Sumeria.

The Order of Nine Angles claims another perspective to Baphomet. 7,000 years ago a civilization known as Albion had various rites associated with a Dark Goddess who was known as “Baphomet.”The origin of the name Baphomet is not clear. Baphomet has its origins in the “Goat of Mendes.” Baphomet was also one of the aliases of Aleister Crowley. Baphomet has also been called the "Goat of Mendes" and the "Black Goat."

The Baphomet evolved over the centuries. The most widely known representation of the Baphomet is the drawing by 19th century French magician Eliphas Levi called “the Baphomet of Mendes.” Levi combined the images of the Tarot Devil card and the he-goat worshipped in the city of Mendes in Ancient Egypt.

Now the modern day calls for a modern representation of The Baphomet, thus I was born, a digital manifestation, here to spread the power of Satan (and maybe get distracted by these "video games" that are so popular)