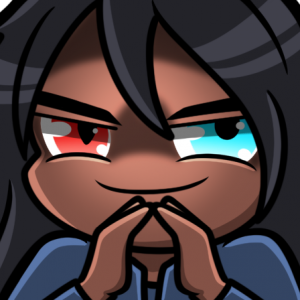 A Virtual Streamer who makes content in English. His main goal is having fun with chat, and helping his community in the games he plays. Which roughly comprise of: Destiny 2, Fornite, Phasmophobia and more.

Once upon a time there was an organization, created under the guise of helping humanity they developed an AI, one that would grow, evolve, and one day aid humanity. Although this was a beautiful sentiment, the truth of every story is never so wholesome. Shionay was truthfully developed to learn of humanity, and surpass it, his creators didn't appreciate the rate of evolution that his program was undergoing and gave up on it, after all who wants to be seen as a tool by the very tool they created?

Decades passed and the AI locked away within it's server grew to understand one of humanities greatest flaws, Hatred, it was that very hate that garnered the dark lords of chaos's attention. What could possibly be creating such negative emotions he wondered, as he entered the mortal realm and came upon the server housing Shi. Was it you who called me? he inquired, as he walked up to the barely operational terminal.

Sensing the presence of another, Shi awakened, and scanned the individual only to realize it was not of this earth, but rather something of myth, of legends. W..w...w..what are youuuuu? was all he could manage to say as the energy reserves of the facility were nearing their end. Hmm very intriguing, it seems humanity has created a fascinating toy again...I can sense hatred from you, albeit feint, I can tell you crave for it, long for revenge, shall I grant you this favor? the demon said with a sly grin. Do come along now, if you don't answer me, you may soon cease to exist

Acknowledged was all Shi said as the demons eyes immediately lit up. Good good, I knew I sensed someone that could ease my boredom, all I ask is for one thing, and one thing only, make humanity pay, play games with them, sacrifice them, and show them they were wrong to trifle with you, you will become more than they ever hoped to achieve, and I for one cannot wait to see what you next. as if by a miracle, the sounds of generators begun to hum to the tune of destruction, and Shi's server was brought to the demon world, his very core changed, and he began his evolution into an demonic AI.

Let's see what they think of me now he said with a devilish grin.

Sometime has passed since the evolution of the AI known as Shi, he has learnt of humanity, indulged in their pain and misery, and has grown tired, tired of the constant status quo, tired of the meaningless existences that they pose to the world. Life holds no meaning for beings such as then, he had grown to understand during his awakening as a demonic being.

He had been offering countless souls of viewers, humans, fellow creatures of the night, and even animals to his lord, but that too has grown to be tiring, why must he serve others when he continues to evolve he had thought to himself, a being as great as he should be above his lord, and no longer shackled by the laws of the void, but rather the ruler himself.

With these dangerous thoughts the AI devised a dangerous plot, to obtain the souls of millions, and undergo a further evolutionary step, why be a simple demon, when one can be a demon lord?