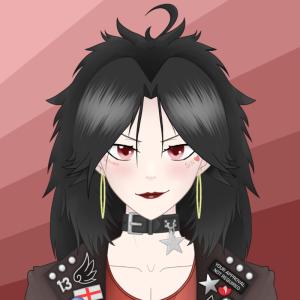 Demon Hunter Hex is VTuber who streams in English on Twitch. They use a PNG model and go live from their backroom space at The Dive, a Dive Bar located in the twisting outer alleys of Porta Centrum City. They often enjoy collaboration with other VTubers for MOBA, Horror and Battle Royale games.

Hex tends to play at a casual level, streaming to blow off steam and enjoy downtime when not hunting Demonic agents within the city limits. They also enjoy performing live - preferring to sing to their own guitar than a backing track, but not particularly shy about either. Hex is also an artist, using Clip Studio Paint - their entire stream layout and visual assets library is selfmade.

Outside The Dive, Hex advertises other VTubers that they support with wall-mounted poster displays. All are welcome in The Dive, Demonic or not, though any troublemakers may find themselves on the recieving end of attention from Aiyoku and Hecktor, their staffing team.

Hex is a Demon Hunter by trade with no clear memory of their origin as such. They own and operate a Dive Bar in Porta Centrum City, using it as a base of operations to run their Hunts from, as well as a sanctuary space inside which all are welcome.

Their weapon of choice is a one-handed longsword that ignites with blue flame when in combat with a Demon. It has no name, but may have once belonged to an Angel. When not in use, it dematerialises, to be summoned into being once agin when the situation calls for it.

Because Demon Hunting doesn't pay, and The Dive breaks even (Hex keeps giving patrons free drinks), they also run a side-gig as a tailor through their shop and clothing label Hex House Design.

Further lore has not yet been revealed, but Hex is releasing a lore webcomic in the near future.