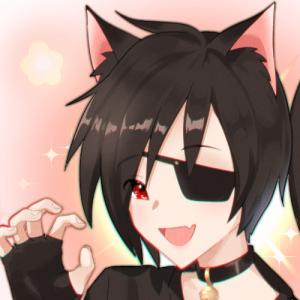 Deko is a femboy Neko Shota (Catboy) Virtual YouTuber who makes content in English and Japanese. He is fluent in Japanese speaking and is currently striving to reach the native level (Japanese Language Proficiency Test N1). He plays whatever games he wants but the most popular genre of games among his fans is the horror genre. Deko is known for being dumb at solving puzzles and 'moaning' a lot when under panic or rage.

A space cat made of stardust and other elements, possessing mystical powers, is bored and one day focuses his attention on the humans on earth. He is astounded and intrigued with the livelihoods of humans. One culture interests him and that is the idol culture. Specifically, VTubers. He decided to go to earth and shapeshift as a boy with cat features (cat ears and a tail) and attempt to bring good vibes via his VTuber Persona, Deko. He also hopes to learn more about human culture and behavior through this journey of self-discovery.

(If Deko addresses himself in Japanese, he would use a made-up pronoun, わっち (Wacchi). This pronoun is a variation of 儂 (Washi), a Japanese pronoun commonly used by the elderly. Deko may be billions-years-old but he is carefree and prefers to use a lighter tone when addressing himself. Thus, わっち (Wacchi) was made for himself.)