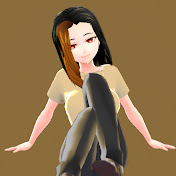 Dead Iweini prefers the name "Princess Dead" since she got abandoned and now wants to be treated like a princess. She considers her fans as "livedrops." Sadly, I couldn't be able to find more information about her because she seems very mysterious and secretive.

Dead is an ink monster. Yes, you heard it, the reference is indeed Bendy And The Ink Machine. Apparently Joey Drews(the creator of the BATIM characters) did work on Dead, as she was meant to be Bendy's best friend, but he cancelled her creation. Since the idea is no more, he assigned her name as "DEAD" because the creation is dead. However, she somehow made herself come to life anyway and now plans on taking revenge. But during the planning of revenge, she literally started doing YouTube.