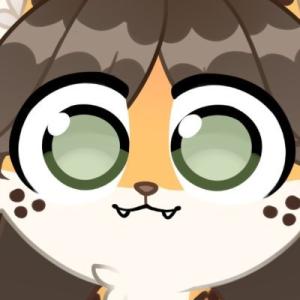 Alice is a leopard kitty VTuber living in Russia. Knows English a little. She is pure and curious and likes hard/cute games. Sometimes she's drawing chibis, composing the music or programming in Python.

Alice came from another world with her friends: Dennmyre and Watari. They are magical travelers that cross the worlds to find new possibilities and researches. While Alice's friends are busy by finding the source of magic in non-magical world of Terra - Alice tries to understand the humans and their technologies.

Actually, Alice is around-20-years old anthropomorthic Leopard. She is limited in most kinds of magic, because of "rules", however, sometimes she casts simple spells, especially because she must hide her original look from people. "People here don't believe in magic, so even if I tell them, they will think I'm a roleplayer or just crazy. However, it's hard to explain the talking leopard staying in front of you. It doesn't look like I'm a robot or wearing a costume, huh!"

Her kitty form is not just illusion, though. She is fully transforming herself into a smol curious kitty to be less serious and more childish. It helps her to rest better and recover her mental powers. In this form, people see her streaming or playing games!