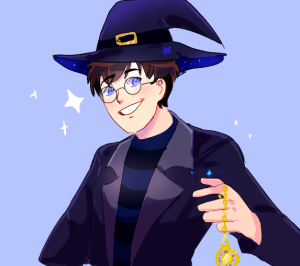 DarkOasis is a 22 y/o English content creator and VTuber on Twitch. He likes playing mostly sandbox games and multiplayer games with his friends. They currently reside in the United States of America and are in Pacific Standard Time. He currently does not have a set stream schedule, so be prepared for sporadic streams!

On the morning of January 29th, DarkOasis was born into this world. Dark had a normal childhood and adulthood as he lived with his mother.

On one tragic night on the drive home, Dark and his mother had gotten into a car crash while driving home from the observatory, she had died on impact. Since that incident, Dark occasionally went and visited the site of the crash and would stare-gaze while reminisce of his mom. But on one magical night while star-gazing, Dark had noticed a blue shooting star descending from the sky. Without even a blink of an eye, the blue shooting star had smite the field in front of Dark. Without hesitation he instantly started sprinting towards where the star had struck and was astounded by what he had saw. The bright blue light and the mist radiating from the star had struck Dark's attention almost immediately. He started walking towards the star, as if he were drawn to it, almost like it was talking to him. Now standing right in front of the star, DarkOasis couldn't help but awe in the beauty that had unfolded right in front of him. Slowly reaching his hand to it, he was sent back by a magical blast knocking him off his feet and into the sky, leaving him unconscious.

Opening his eyes to the bright light of the sun, DarkOasis woke up confused to what had happened to him the night before with the shooting star. At full speed, he ran back to where the star had struck the night before. But when he had arrived at the crater once more, the star was no where to be seen. Now disoriented by the disappearance of the star, DarkOasis scurried back to his house. Once arriving home, he ran to the bathroom and started to wash his face. That's when he noticed something in the mirror, his left eyes iris had changed to a star. In shock, Dark backed away from the mirror, his mind racing with questions that he knew that he wouldn't get answers to.