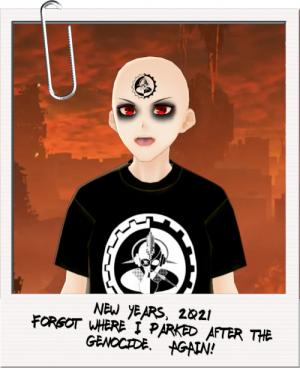 Jordan (DJ Crotch Sweat) is a nasty ugly human who I had to take over the body of so that I could exist in this dimensional plane. Apparently most people on this planet are not thrilled with Cephalopods who can speak and defy gravity. Also there is the Cheetos thing and the Red Bull truck I stole.

You know when you spend as much power as I did to rip a hole in the fabric of reality, you would think the universe would be kind enough to deposit me in the head of a sentient human that was at least from this 4th dimensional space. What did I get instead? Some Punk Rocker that happened to be sleeping it off in a puddle of his own vomit in the Bronx 1981. I did like the haircut but still. Thus why I had him submit to the process of becoming digital. His skull was getting cramped. At least this way I can easily correct the mistakes he made originally. Oh well, stranger things have happened.

BTW, how do you people reasonably exist with only 4 appendages? Walking bipedal? Do you people have a death wish or something?

Halloween, 1938, Grover's Mill. A transmission from the great Orson Welles reports that the Martians have invaded the Earth. Then as quickly as it began and with huge gaping plot holes torn into the history of man kind I might add, the invasion stopped. Yeah. Not really. You have no idea how many people that we had to Mind-Wipe after that whole debacle. The people of 1938 and more to the point, New Jersey, were not ready for the concept of a group of interdimensional creatures accidentally blasting their way into this dimension.

Technically we were attempting to tear a hole in reality but only insomuch as we could go get a decent burger. There is this place in Libby, Montana that makes the best.........never mind.

So, myself, Tim, Jeff, Tiny and a handful of others (more to the point, the Seven Hyper-Intellects of the Multiverse) ended up in New Jersey. Ugh. If you thought Jersey Shore in this era was bad, you should see it in 2046. Entire planets have been depopulated by that show. Thankfully time is much easier to transverse than the higher level dimensions so we traveled back before humanity was a thing and moved to Nampa, Idaho which at that time was known as the "Dirt of Ug". You would be surprised at how easily dinosaurs take to being used as pack mules to haul the ship to the other side of the continent. You are all going to be sooooo pissed off when you find out how much of history isn't like you were taught.

Oh and BTW God looks and sounds just like Sean Connery from Zardoz. Also his name is Bob. I am not so sure I would go so far as to call him God though. Whatever floats your boat though. We all have to have a.......Okay back to the plot.

I will have to write a book about that later. Something akin to Little House On The Prairie but with more colorful language, Beer and less innocent douche-baggery. The multiverse is so much more fluid than your tiny human minds give it credit for. Everything that is done, thought about or generally has some probability of being a thing has a place in this big bad plasticized Zip-Lock baggy we call the.....Universe, Multiverse, Newark, whatever. So many names...... I have come to calling it the Dumpster Fire of the Stars.

Anyway, after centuries of trials and tribulations on this worthless Dirt-Ball we we ended up with me being the only one of the Hyper-Intellects left in this time/space. So really at that point I became the CEO of this endeavor that is now called Merciless Radio. I would tell you the original name of this place but I seem to remember something about keeping this kid friendly. You all need to give kids more credit.

Of course, I had to repopulate the station with who I could after the great incident with DJ Sexbot. Thankfully a few AIs, some of the cloning material we kept in tubes, the Great Multiversal Omnibus and the will to survive and dominate, we hopped on a freight train bound for Alaska and from there Pipyat in the Ukraine. You people are retardedly afraid of radiation I have to say. I mean who wouldn't want extra parts?

BTW, who would have ever thought someone with a name like Sexbot would have been a Chaos Daemon? Live and learn right? Next thing you will tell me is that Beer is the tool of Satan. Meh, I refuse to think about it.

So from there I ordered a Pirate Radio Ship from Planet Yarrrr and we started over. We now hover 56 Kilometers above the earth with the cloaking device in constant on. Well sometimes we like turning it off for about a minute or so. Gives the armed forces of Russia and China a heart attack. I also like dropping lead weights on the cities below us just to see what happens on occasion.

So, Ill have to give you all a tour sometime. And with all of that I would like to say thanks for stopping in. Also give us your money or we will disintegrate your frontal lobe. Lets see how you do in real life with no bladder control eh?

PS: What is all of this about Genre? We have to choose? BTW, we don't do Woke. I am allergic to human stupidity. No seriously, I break out into huge boils. I have to drink heavily for about a week to get them to go away.

I suppose if you all have to ask, we like the esoteric and the chaotic. For example, I think every 5 year old little girl should own a Barret M92 .50 Caliber Sniper Rifle. Its adorable. I think global dominance and Vocaloid belong together. I think that Dorohedoro and FLCL (old version) should be the template that we base all societal norms on. You all will get to know me over time.

No really. I am beaming the information subliminally into all of your minds. Give it time.