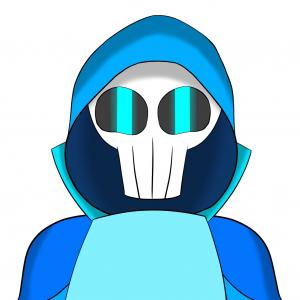 Cyben X, or Ben, is an english VTuber/VStreamer who creates a variety of gaming and art content. A fairly new streamer, Ben is independent and fosters personal interaction with chat due to being a small channel, and streams 3-6 times a week on Twitch.

Not much is known about the skeleton presenting itself as Cyben_X.

Theorized to be puppeted or at least heavily influenced by some sort of ancient entity beyond comprehension, it's bones hold memories of countless lifetimes within them, and those who have an affinity for arcana have identified it to hold immense amounts of power within it's thin frame.

Whispers suggest that the skeleton is merely a projection of an immensely powerful creature from a different universe, which it uses to experience different worlds and interact with them directly. It's intentions are unknown, but its usually docile nature causes some to believe that it is merely an observer, at least for now.