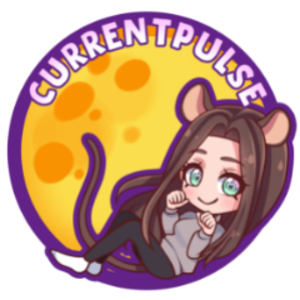 CurrentPulse is an english speaking variety virtual streamer, who streams on Twitch and Trovo. She also posts the occasional video or clip to Youtube. She welcomes all to her channel, it is a safe chill place for all to chat and talk about games. Pulse is a smol field mouse who likes games, and meeting and talking to new people. She loves classic books, hot teas, coffee, and energy drinks. She has two kittehs that love her, and no they do not try to eat her.

Chibi/Small model lore: CurrentPulse is an Eastern Deer Mouse. One cold night she scurried into a warm home, and rather than toss her back out into the cold the homeowner took her in. Pulse now spends her days warm and loved. She loves playing video games when her human friend is away, but when they are home she much prefers snuggling up against their neck and watching whatever they have on the TV.

Genshin Geo OC model lore, Debut TBD: CurrentPulse is a Gemologist studying Gemmology. Gemmology is the science dealing with natural and artificial gemstone materials. It is a geoscience and a branch of mineralogy. Pulse was born in Sumeru and that is where she obtained her vision. One day, while out exploring Sumeru for unique gem specimens she came across a merchant being attacked by some Eremites. She did not know how to assist the merchant and in despair called out for help, and that was when she recieved her vision. With her vision she was granted the ability to cage her enemies and hold them in stasis in an amber orb long enough to grab the merchant and run. As she grabbed the merchant by the hand and ran, she looked behind her long enough to pull the orbs together, shatter them. and continue running. From that day forward she promised herself to aid others whenever needed. It was after getting her vision that she also decided she wanted a change of scenery, and new rock speciments to study. Pulse then made the choice to leave her home of Sumeru behind and relocate to Fontaine. She instantly fell in love with Fontaine, and made it her permanent home. This doesnt stop her however from the occasional trips back to other areas of Teyvat in search for new specimens to study, and that possible discovery of a Gem no one has ever seen before.

Talents; Basic attack - Throws amber Orbs at enemies. Talent Name - Amber Rain Skill - Creates amber orbs around ememies that hold them in stasis. Enemies can be attacked while in these orbs and dmg is scaled based on her DEF. Talent name - Stasis Orb Burst - If multiple enemies are in Stasis, orbs are pulled together and shattered. If only a single enemy, orb just shatters. Dmg scales based on DEF, and stuns ememies for set number of seconds based on the level of her talent. Talent name - Shattered Fragments

Constellations; 1 - Name; Amber, Stone of Preservation. Stasis Orb's AoE is increased by 30%. 2 - Name; Shattered and Stunned. Increases the level of Shattered Fragments by 3. Maximum upgrade level is 15. 3 - Name; I said Timeout. Stasis Orb's duration increased by 3s. 4 - Name; Seeing Amber Stars. Duration of Shattered Fragments' stunn is increased by 3s. 5 - Name; Deja Vu. Statis Orb's CD is decreased by 15%. 6 - Name; Preserve and Protect. When a Character deals DMG to a Stasis Orb, 30% of their DMG dealt is converted to HP. A single Instance of regeneration cannot Exceed 6% of that character's Max HP.