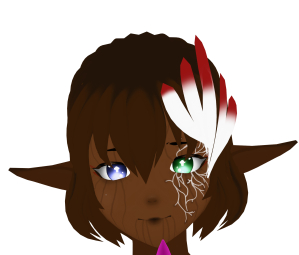 Cordy is a female Virtual YouTuber who makes content in English. She streams a variety of games and also does VRoid art streams as well.

Cordy is a fungi hivemind made up of mushrooms in the cordyceps genus, a type of parasitic fungi that survives by latching itself into its host and taking control of their primary bodily functions. While inactive (ie, not seeking any hosts), she is commonly found lounging around the Bay House being all adorable, a behavioral pattern learned by observing countless instances of cute and cuddly behavior being handsomely rewarded. While her main body is comprised of uncountable amounts of tiny little spores, her main consciousness resides in her mushroom cap. Her instinct to survive, mixed with her observations of the outside world, has led her to almost completely abandon the idea of taking over the ecosystem, instead electing to simply exist as a single entity. Whether she chose to do this intentionally or simply because she forgot she was able to do so remains a mystery.