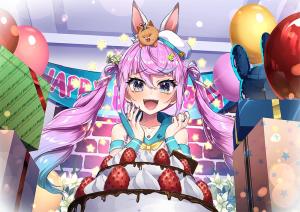 Comrade Karin (同志かりん) is a female, bilingual Vtuber. She speaks both Japanese and English and is currently learning Spanish.

Formerly streaming exclusively on Japanese platforms such as NicoNico and Twitcasting, Comrade Karin started to stream on Youtube in February of 2021. She now multi streams on Youtube, Twitch, NicoNico and Twitcasting. Karin's content is varied, she does everything from gaming to cooking as well as classic just chatting and educational streams such as spanich learning. Her joyous and outgoing personality allows her to connect with her audience no matter the subject of the stream.

Comrade Karin's favourite things are Pomeranian dogs, body builders and the Army. Her favourite bodybuilder is Dwayne "The Rock" Johnson, and her favourite gun is the Mauser C96. She also holds a deep interest towards human cultures and wants to learn more about her viewers' way of life.

Her model was created by HoneyRay, but Karin has been known to make frequent changes to it, resulting in a vast array of different outfits.

Comrade Karin is a Lunar rabbit diplomat whose mission was to deepen her people's relationships with humans. For that she went to earth but ended up falling in love with Pomeranians. In order to not get fired by her boss for losing interest in her mission, she decided to start her channel and make contact with Earth's people through her streams.