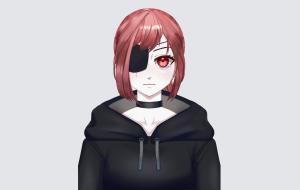 Eva is a female Virtual Streamer who makes content in English. She streams a variety of content, from Jackbox Party Packs to various single player or multiplayer games with friends. She focuses on chat interaction, and creating a chill environment for people to hang out and talk more than anything.

She is often accused of being a tsundere or being cute by those around her, which causes her annoyance and makes her deny it further, usually resulting in increased accusations.

Eva lost her parents at a young age in a mugging attack, which also led to her losing an eye. Due to being passed around through lots of different homes and not getting close to anyone, she developed a tendency to prank others and perform minor crimes. The adrenaline associated with such acts quickly became an addiction for her, and she went on to become a mercenary as a result of it, figuring it would give her a place to provide the rush that she craved while making easy money. Despite being excellent in combat situations, a crack shot and natural strategist, when it came to working with others Eva was anxious and unsure of herself, leading her to often ignore orders and try to do as much as possible alone.

Though she was ultimately effective, this put her at odds with others more often than not, and her behavior alongside numerous confidence issues led to multiple confrontations, which eventually led to her leaving her mercenary life behind her after a few years. Though not much is currently known about what happened, nowadays, she spends her time trying to make new friends and work through her heavy shell, trying to open up by playing action games for the rush they produce and streaming to meet new people.