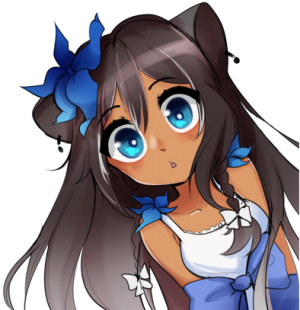 CiNa is an Otterite from the underwater Kingdom of Kaowanai. CINA streams with their right hand Ci Pup Azul. Interests include anime, gaming and music.

Deep under the sea near the city of Atlantis, there is a Kingdom not spoken of by many with a Princess who’s smile lit up the ocean. She had a power that kept this kingdom alive.

Many years ago a mysterious void enveloped her Kingdom. The void began to take all that she held dear. Her family pulled away from her, try as she might, one by one they all were swept away.

The pain in her heart grew as she let out an enormous cry. A shining light poured out of her heart and finally chased away the void.

The Kingdom was left in shambles, and nothing could bring the light back into her heart. All that remained were the princess and a handful of ci pups.

The princess was empty inside, the smile she wore on so proudly faded with the void. Her power merely a flicker now barely enough to keep the lights on.

One day her right hand Ci Pup couldn’t take it anymore. He wanted to help the Princess by any means possible. He broke the sacred barrier and left the Kingdom in search of answers.

The Right hand Ci pup made it to the surface and found others who looked very similar to the Otterites. Most of their bodies were hairless but their ears were misplaced and their tails were missing.

He returned to the Princess to report what he found. She held him tight scared she had lost him as well. After many discussions the princess and the ci pups decided to leave the Kingdom in search of answers.

They made their way up to this new World. The princess steps onto the surface for the first time. She spots a familiar face in the distance, a person who looked just like her sister. She runs over to the person and hugs them from behind tears falling down her face. The girl is shocked. She turns around and looks at the princess, the girl sees the sadness in her eyes, she gives the princess a forgiving smile and some head pats. The princess feels the warmth and love from this stranger and the smile she gave her, lit her heart back up.

The girl walks away and waves at the princess. The Ci Pups gather around the princess, she releases her magic back onto. They light up with the return of their magic.

The princess decides to stay on the surface with her right-hand Ci Pup as the rest head back to rebuild the kingdom. The princess's goal now, is to find what happened with her family and bring a smile to everyone she can.