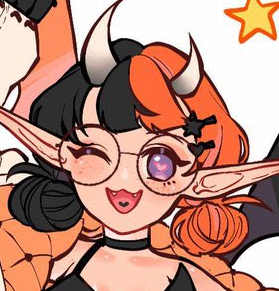 Chiitrus (or just Chii) is a variety streamer that streams content in English, however she also speaks French. She is non-binary, Canadian, Spooky, and hates oranges. She stream games, and Just Chatting streams. She calls her viewers her Li'l boos, to match her halloween theme. Her character is a demon who feeds off of the fear of others, and so she lives in a haunted house where she culminated over the years a feeding grounds of sorts. However, she says that the haunted house attraction began to lose its allure, and so she moved to instead streaming horror games in order to feed off of her viewers.

She is often associated with hating oranges, and loving milk. This all started with a post on twitter stating "orange juice is yucky" which then led to an argument on Twitter with Twitter use @PenemueCh, also known as PP, and one of Chii's wives, about whether or not orange juice was better than milk.

She is 5'1" , her shoe size is 7.5 , she is a Scorpio, she has a tongue piercing that looks like a black heart, her favorite color is purple, and her favorite drink is Boba.