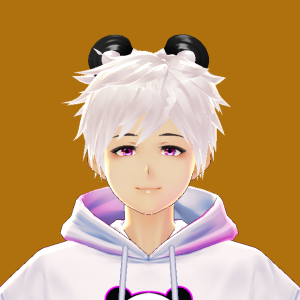 CharuzuPanda lives in a bamboo forest somewhere in the Philippines. While walking deep into the forest, he saw a little girl crying. Panda approached the girl slowly so that he won't scare her. The panda sat in front of her from a certain distance and extended his hand, hoping she would see it as a sign of friendship. The little girl reached out to his hand and she was not scared of him anymore. She hugs the panda tightly while crying, she was upset about something but the panda can't tell what was it. The panda hugged the girl back to tight, she stopped crying and smiled with comfort.

The panda accompanied the girl out of the forest but before they can reach outside, they saw a group of people with guns copping off bamboo trees illegally. Panda tries to walk away but they got caught from behind. They got loose from their grips and ran away as fast as possible. The loggers tried to open fire at the panda but some bullets ricocheted to the little girl as well. The Police heard the commotion and tries to capture the loggers. They didn't saw the little girl or the panda because by the time the Police got there, they were already deep in the forest.

They stopped in a certain spot to rest. They knew they were bleeding to death and can't stand anymore. They can only wait for a miracle to happen or just hug each other and spent their last moments together.

Out of nowhere a ball of light approaches them, flashed their eyes and took their conscious somewhere white and foggy. The same ball of light approached them again and turned to a beautiful Enchantress. She said that she can't save both of them so she gave them a choice. Save the girl and she will turn into a panda or save the panda and he will turn into a Human being.

The little girl instantly said save the panda. The Enchantress asked the girl if she is sure of her decision. The little girl replied that she doesn't have a family to go back to anymore, they were killed by the same loggers that shot her and the panda for trying to report the illegal loggers to the police. She would rather be with her parents than going back to the place where there is no future for me.

Panda can only cry and grunt at the girl, trying to change her mind. The girl looked back at the panda while crying, knowing that she might never see her again, so she approach the panda, held his face closer to hers and said:

"Don't worry about me, I will still be watching over you. When you go back, I want you to meet new people, make some friends, fall in love, make mistakes along the way and learn from it, live life with no worries and regrets, and once you're ready, we will meet again. That's a promise."

The little girl's body merged with the panda and turned him into a male humanoid being. Before he could wake up, he hears the little girl's voice fading away saying: "I will always be with you" over and over again. He opened his eyes wide while his tears kept streaming down his cheeks. He saw his humanoid hands that was once paws. He remembers the first time he held the little girl's hand and made him tuck into a fetal position and kept crying his heart out.

CharuzuPanda is now streaming with an open heart to anyone who likes to be friends with him.