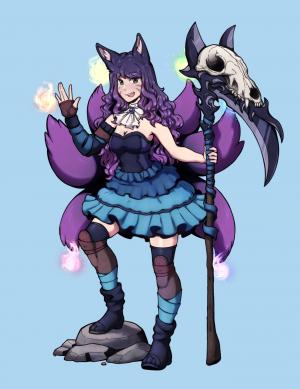 Charky is a trans woman VTuber from Scotland. She plays a variety of games on her twitch channel.

She is the Goddess of Life and Death who trans your gender and second monarch of the Foxtail Kingdom, Vulpinia!

4494 years ago the Kingdom celebrated the birth of the God of Death's and Goddess of Life's only daughter, Charky!

But the love they shared was not meant to last, her mother having left to distant lands due to her conflicting nature with Charky's father.

Raised by him alone, watching while he formed his own nation and ruled like a tyrant for 1500 years, she finally confronted him and bested him, taking his skull and affixing it to her scythe, Charky claimed the throne and began a tradition of celebration life, fun and love~!

Currently Charky streams games to the denizens of her own realm of hell, a pocket dimension called vulpinia, and the mortals of the wider world.