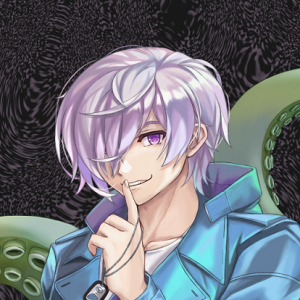 A forgotten god who has been sleeping at the bottom of the sea until recently, waking up extremely weakened. Due to his current state, he had to take over the body of a young man that happened to be nearby as a parasite. He soon found out that not only his followers have forgotten about him, no search result appeared when one types in "Chaos Sinfora" in this new thing called "internet". Believing that someone is trying to get rid of all information about him in order to reduce his strength, Chaos sets out to seek them in order to exact his revenge. However, knowing that he is able to do little with his current feeble human form, Chaos decided to create a vtuber to collect funds and followers so that he can once again claim his rightful place as the ruler of all.