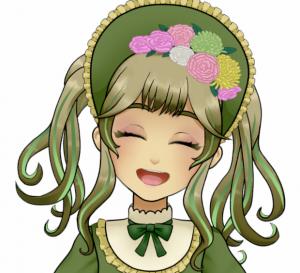 Cecilia Laruine is a female Virtual Streamer who makes content in English. She streams 3D animation, music, and games. Her favourite games are rpg, simulation, rhythm, and survival games. She loves flowers and changes her flower accessory every game. She currently lives with her Landlord but dreams of living in a field of flowers one day. Her birthday is November 2nd.

Once upon a time, there was a lonely spirit who found herself in the body of an abandoned doll. With her new body, she attempted to make friends with people, but became saddened when they would inevitably run away at the sight of a moving doll. One day, however, she met a mysterious person who not only wanted to be her friend, but offered to be her Landlord. The Landlord made the spirit a new doll body, and gave her a name, Cecilia Laruine. To pay back her Landlord, and to make it up to the people she accidentally scared, Cecilia became a streamer.