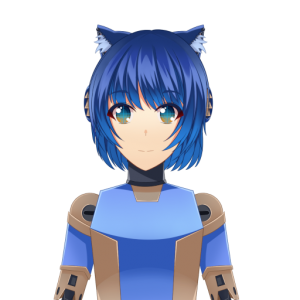 CAI-TAn is a female android VTuber / VStreamer and game developer who makes content primarily in English. She often streams while working on her game design and programming projects, as well as a variety of gaming-related content. The games she plays include sandbox and construction games such as Minecraft, competitive games such as Splitgate, and many other singleplayer games like the Ratchet and Clank series. CAI-TAn enjoys discussing her game design philosophy whilst playing games she likes or dislikes, as well as meeting new people and interacting with other sentient beings in general. She also has a great interest in and affinity with sniper rifles, and calls herself the "Toaster Catgirl Sniper". Her followers are known as "Toaster Frickers", a reference to Jamezietocool's Persona 3 parody series. Currently, she is working on a top-down shooter known as Gunsmith Mercenary, which features a complex weapon crafting system that allows deep customization of every type of weapon's form and function. You can even make a gun out of pasta.

Her name is pronounced "kay-tahn". She is very particular about how her name is spelled, and is disheartened when there isn't a break between the two parts of her name.

While she was originally constructed as a combat android to be licensed out to PMCs, the engineering group developing her technologies, Dakota Industries, eventually ended up cancelling the project due to inflated costs. However, the one prototype they created, Prototype 01, did not want to be decommissioned, and wanted to live her own life instead. Exasperated, the project lead, Dr. Cassandra M. Dakota (commonly referred to by CAI-TAn as "Doc"), left the prototype in the custody and supervision of a friend of hers, another VTuber known as Airi Morganite. During this time, CAI-TAn actually reprogrammed herself, and replaced her combat programming with her own custom code. Inspired by her new caretaker's own interests, she decided to become a VTuber.

The acronym "CAI-TAn" stands for "Comprehensive Artificial Intelligence minus-Tactical Android". The "minus" represents her reform after being a combat android, and thus it's actually important to her name and lore. She tends to get disheartened when she can't create some sort of pause between the "CAI" and "TAn" parts of her name on a form, to represent her disconnect from her combatant past.

CAI-TAn's "cat ears" are actually sophisticated vibration antennae that can pick up not just sound waves, but any vibrations in the environment, giving an advanced sense of hearing.