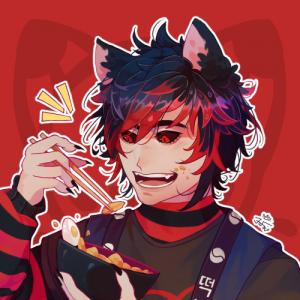 Bokki is a cat boy VStreamer on Twitch who loves Korea and techwear, he likes to play games that are a little easier so he can interact with chat more, since his Neon army mean a lot to him. Bokki's go to games are: Dead by daylight and Apex Legends. But if you're lucky he might play something special! Bokki is also an artist, he specializes in character illustrations and chibis, so he tries to stream art/commissions when he can!

Bokki was once a stray kitten left in an alleyway behind a food market, nobody liked him because they thought his eyes were scary! During his time in the alley he made friends with a rice cake and half boiled egg, named Ttoek and Eggbert.

One day a nice man spotted the kitten curled up under the trash and took him home. Bokki loved his new owner and would cuddle with him everyday, satisfied that he and his friends finally had a place to call home.

Like all things when their time is up, Bokki's food friends began to rot. Not wanting to see their friend lonely they left a peice of their heart to the now adult cat. Not knowing that their final prayer would turn the cat into a human. Bokki's owner found the cat naked amoungst the blankets one morning, not knowing how to process the change.

Bokki gradually grew bored of lounging all day and playing with his cat toys, the activities of a cat began to seem very boring. His owner showed him some magical devices, and taught the former cat how to play video games. With a new passion burning in his heart Bokki set up his first ever stream, he finally found a community that could fill the void for his forever friends, Tteok and Eggbert.