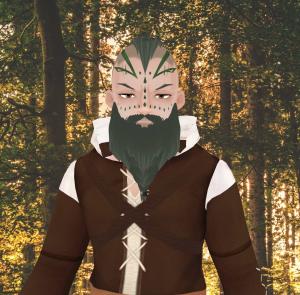 In the old times, the Earth was still a hot ball of melted metals. But, as it started cooling down, water became more and more abundant, and life could start flourishing. With the first microbes and cells, Nature was born. She was still young, just trying to make plants and animals that could survive. To help her nurture and take care of her creations, she selected a few of the roaming spirits, and among those was Boio himself.

Back then, his work was easy - making sure that cells and microbes are multiplying, giving them a few pushes to evolve, to adapt and to survive. Eventually, cells evolved into fish, and fish evolved into lizards and mammals. Back then, oxygen was abundant, so the plants grew to great sizes, and same with the lizards, who became the dominant species. In the seas, which were mostly overseen by the other spirits, plenty of fish swam and lived. He enjoyed the dinosaurs, chasing them around, giving them food and helping them specialize for survival. But the Universe was not a fan of dinosaur.

A giant meteorite hit the Earth, and most of life was wiped out. Boio was saddened by this, but Nature, in her infinite wisdom, told him that life would go on. And she was right, instead of lizards, now the mammals started dominating Earth. And they started evolving, changing and adapting. Among them, the most interesting were the primates, which started evolving in an unexpected way. Their brains started growing, and they even started using tools.

Boio liked these new primates, who started calling themselves humans. They started making groups, then clans and even kingdoms. So, he decided he would reveal himself to the humans, to a small clan of Celts. They first thought he was a god, but he knew the only ones worthy of being called gods were Nature, Earth and Universe itself. So, he adopted the role of a prophet, a priest and a spiritual leader for this clan, which in turn started calling themselves the Boii clan. He taught them to respect nature and take care of it. But sadly, he could not keep them from humanity.

The clan started getting into fights with other clans, and not for food, but for power. Boio did not like this. He tried to stop them, but his pleas fell on deaf ears. When he saw his clan join forces with Hannibal, who enslaved the majestic elephants for warfare, he decided to withdraw himself. After a while, some human named Caesar decided to come and attack the clan, and the clan plead Boio for help, but he did not want to help cause more bloodshed in the name of power. He decided to sleep.

He slept for almost 2 thousand years, when he was abruptly woken from his slumber. Nature cried out in pain, as two explosions hit the Earth's surface. Boio felt this pain too, pain similar to the meteorite, smaller in scale, but much more... unnatural. The year, in human counting, was 1945, and the atomic bombs fell. So many souls lost, utterly obliterated and torn apart. This was something he could not allow to continue. He decided to walk among humans once more, this time, disguised as one of them, not showing any signs of his powers. He was surprised by how much have the humans have changed the Earth in his absence. Where once were forests, now were cities, even in places previously unimaginable.

After just a little bit in his eyes, humans decided that Nuclear weapons should not ever be used, which made him very happy. But he learned better than to trust humans. Instead, he decided to stay awake and observe them, only showing his powers over life if absolutely necessary. But while melding in, he decided to find out more about the customs of these humans, and he heard about streaming, which seemed like a good idea for spreading his message of protecting life and nature.