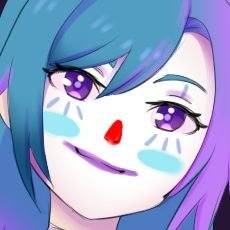 Bodango is a virtual clown that streams a variety of games and doubles as a musician under a different alias.

He is currently the sole and primary subject of the 《CDTV》 project, or 《CLOWN DAILY TELEVISION》. He occasionally works alongside fellow vtubers, and a manager (@not_jsuschrst on Twitter).

In his streams, Bodango is often joined by a catfish named Ashley Taylor, a pop-punk merch wearing bear named Punko, a caiman named Joseph and his adopted catgirl daughter, Stephanie. Bodango also streams out of a basement within the 《CDTV》 studio.

Bodango is a notable fan of the DOOM and Godzilla franchises, Left 4 Dead 2, horror media, and an active consumer of Bang energy drinks. He is also known to occasionally violently grip foods.

Bodango was placed onto this reality's "Earth" from the Circus, a realm of existence where other Clowns are created and raised to maturity. He has existed throughout 20 Clown lifecycles, making them somewhat powerful.

Bodango is canonically 212 feet tall, wears timbs, wields a chainsaw amongst other weapons, and contains an immense amount of nuclear energy.