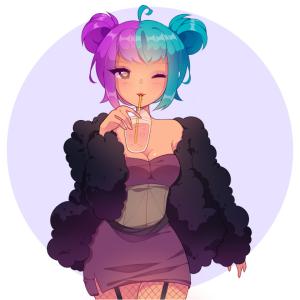 BobaBitez is a Hispanic variety Vstreamer/Vtuber who wants to share a little bite of happiness to the world. She dabbles in art, games, cooking, and sometimes singing.

Boba is a tad bit shy, quite an air head, and giggles most of the time... even so don't let that fool you as her streams tend to be filled with a lot of squawking & smack talking especially when she is with her "homies" as she likes to call them.

Boba is currently working on a rebrand/redesign, she now goes by BudgieBoba

Boba is a parakeet that wished upon a star to become human, or at least gain a human from so that she could be of help to the elderly witch Opal who had taken her in and healed her when she was just a small parakeet who was thrown out by cruel breeders for being too small, imperfect, and quaint.

She spent 5 years with Opal tending to the witches small garden cafe and learning how to make simple healing potions for clients who were in need. After Opals passing Boba became the sole inheritor of the witches estate. With Opals original visions for the cafe in mind Boba decided to purchase the surrounding land to expand the garden and build a quaint restaurant, with primarily outdoor seating, as well as small lodging areas where those in need could get back on their feet.

Since then she has put most of her focus on helping others, waitressing, and managing the garden and is learning and trying new things alongside new friends and even her soulmate.