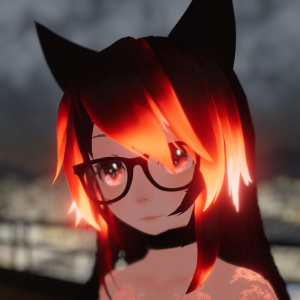 BlackLight is a Norwegian VTuber & Streamer who is often seen drinking with friends in VRChat. They're mostly known for having a deep and soothing ASMR voice, and due to getting comments on it in-game very frequently, they started to put the reactions into a compilation series. Sometimes they will also swap to a more feminine or childlike voice to bamboozle people or just because they feel like it.

They can sometimes be found asleep often close to a group of people as they seem attracted to some groups of people even when falling asleep.

If, however, they don't fall asleep while drinking they often become incredibly silly and often act in a lot of cute mannerisms. Tho they are likely to continue drinking uncontrollably until they eventually run out of battery like some kind of toy. They will often world hop randomly before falling asleep to the loading music during this time.

It's said they can seduce anyone with their voice, tho the reality might be more modest.