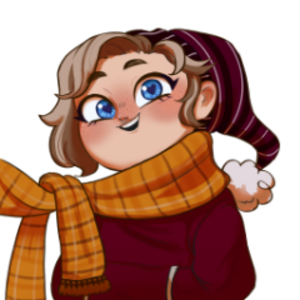 Bey is a variety VStreamer on Twitch who mostly does game streams with occasional art streams sprinkled in. They mostly stream Minecraft, Art, and Fortnite.

An airheaded forest-druid nymph managed to hobble out of the dense greenery they were spawned into and happened upon a civilization. They were cautious of the mortals at first for they immediately mistook them as a demon due to them being in their true form. To lessen the fear, they took it upon themselves to shift into something more friendly in appearance. A small beastial digitigrade form came to greet them finally and they praised the fae, unknowing of them being the "terrifying monster" that originally terrified them. Beydiocris bestowed upon their grace to the village, granting them plentiful harvests for decades.

It wasn't until many a year later that the village came to grow into a town, and shortly after into a city. Monotheistic religion spread through slowly and the main church that was built in the middle of the city had erected a statue in a monotheistic God's honor while in the midst of a festival of a holiday to celebrate the God. The praise and appreciation for all the nymph had done for them trickled away and in that moment, watching all of the mortals celebrate a God who had done nothing for them, they erupted into a fit of rage.

When they awoke, an immense amount of time had passed and the town they once loved to be a part of, was in ruins. The forest had overtaken the city once more and the lush green forest had reclaimed it's land. Their memories were foggy, and the nymph arose to continue wandering off to an undetermined destination. Mortals continued to give them a sense of unease, though not sure why those feelings were brought on.

A thud into the back of a being they didn't happen to notice before and they were quick to apologize only for a deep voice would cut them off and tell them they had nothing to be sad about. A man with long curved-back horns and a black eyepatch over his left eye bent down to meet them at eye level and it was love at first sight. They soon came to know him as Apherius and since that moment, they were in-seperable.