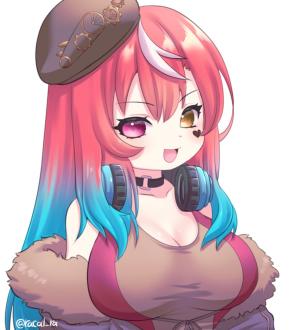 Aya is a (She/Her) VTuber on Twitch. She is a goofy variety streamer who hopes to create a cozy, safe space. She is also part of the LGBTQIA+ community and identifies as Transgender.

The Scarlet District, known to the human world as the Highly Advanced Research Center (HARC), archiving all sorts of information and data collected and shared through its specially and carefully selected citizens, anyone with a Maple Leaf Symbol (known as the Momiji Seal) on their chest are such selected citizens. They are encouraged not to take this information for granted, and instead strive to question and delve into even more mysteries from the facts they are given. Such a system has led to the city being recognized as one of the most isolated and intelligent civilizations today, housing numerous elites of the Wisdom Foundation of the World. Leading this seemingly beautiful utopia is A.Y.A., an A.I. developed by the city's founder to be the core of the Scarlet District, while also serving as the acting observatory and director of the Expedition Department, constantly on the move throughout the planet, finding mystery after mystery, mystic after mystic, filing each one away, leaving no enigma behind, while keeping them secret from the outside world. (Credit: LeeKan)