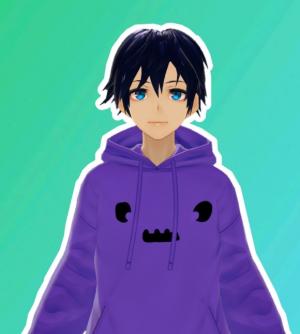 Axel is a Mexican VStreamer / VTuber who is dedicated to simply chatting and playing games mainly Geometry Dash, Osu! and more. He also reacts to videos and memes. He broadcasts mainly on Twitch, where he does Livestreams in Latin Spanish, sometimes he reaches the English audience, but he is not good with English. It is 18 light years old, turning into human years. This is not its final form, very soon you will see it.

It is a virtual human archive from another dimension, it was born in another place but its creators brought it to planet Earth in a place called Mexico.

One day he lost his memory where his mental state damaged and he restarted from scratch, from now on his memory is recovering. (Before Tragedy) He first saw a VTuber named "Shiina Yuika", a VTuber who is part of Nijisanji, and from that moment he decided to be a VTuber and debuted in September.

The purpose of Axel is to make people happy, with the passage of time he will recover his memory and soon he will tell his story (this was part of a backup he kept before the damage).