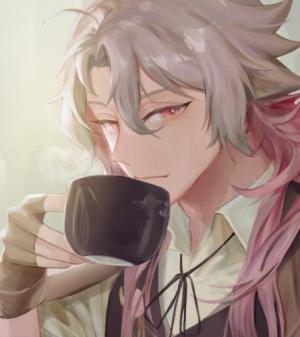 Avalon is a virtual streamer who makes content in English on Twitch. As the self-proclaimed 'greatest rookie detective', he plays a lot of mystery-detective and story-rich games, visual novels, and the like. He enjoys playing multiplayer games with other streamers as well. When he's not playing games, Avalon likes to draw, and sometimes he does it on stream. He also enjoys learning new things and talking about many topics, so he does the casual just chatting streams once in a while.

He is a fan of Ace Attorney. He loves dogs, coffee, dad jokes, and solving cases and puzzles.

His pronouns are he/they. His birthday is January 22 and he's an Aquarius.

Orphaned at a very young age, the orphanage that found and raised him gave the name Avalon Rose. He was a good kid growing up; staying away from the bad crowd and keeping himself on a relatively straight path. After graduating from school, Avalon left the orphanage to live on his own.

As he was contemplating whether to pursue higher education or apply for a job, Avalon stumbled upon a crime scene. A robbery had happened the other night, and the authorities had started investigating the area. Avalon peered in along with the curious crowd, trying to make sense of the scene. While Avalon's train of thought was running all over the place, a man claiming to be 'the greatest detective in history' started deducing loudly regarding the crime to the head inspector. Everyone surrounding the scene could hear him, including Avalon.

At that exact moment, Avalon was in awe at the man's wide array of knowledge and the confidence surrounding his deductions. The man had got a hold of Avalon's admiration, and he proceeded to ask if said man was willing to teach Avalon and be his mentor.

Now, Avalon lives in an apartment with his mentors, Mr. H and Mr. W, the landlord, and their dog. Avalon's room is in the apartment building's storage attic. He's working under his mentors' private investigation agency, H&W P.I. Office, which is not associated with law enforcement.

During his debut, Avalon accidentally showed a ripped page from a police report. The title read "Case File: H&W P.I. Office". Some of the important keywords from the page were scribbled out, but the more relevant parts of the case file were available to read. An anonymous witness stated that they find it quite odd that a series of cold cases that caused the police so much time and trouble were solved so fast by a private detective agency; namely the H&W P.I. Office. They also claimed that despite the agency being made many years ago, the cases started getting solved recently; sometime after they recruited their newest member.

The case file also had an evidence list section, where it lists the relevant evidence to the mentioned cold cases. There were also polaroid pictures of various ciphers left at some of the crime scenes. A suspect info section is also on the page, but whatever is written there is covered by the polaroids.

How Avalon got a hold of the page remains a mystery, and whether or not he'll explain this in the future is unknown. All the people know for now is that something big is hiding behind the 'greatest rookie detective'.