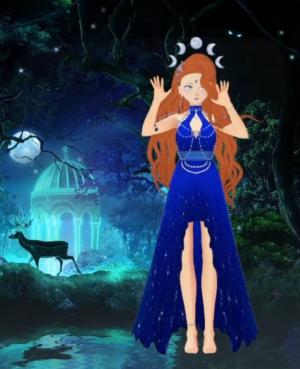 Athanasius (Atha) is a 3,000 year old Moon Goddess that just wants to bring joy and laughter to everyone. She is an EnVtuber and Voice Actress.

Athanasius is her name, but you can call her Atha. She's a 3,000 year old Moon Goddess that left the Celestial Realm in search of friendship, after she escaped from the Enchantment Arena her twin sister locked her into. She is from the First Family in the Celestial Realm. The king of all Gods/Goddessess is her father his name is Aethan, and he is known as the Weather God. Her mother is named Athinina and she is known as Mother Nature. Then there is her twin sister named Athariel, she is known as the Sun Goddess.

She has found a quiet little place where only a special few can see her here in the mortals realm called Earth. She calls this place the Moonlight Forest, and those that can see it and see her she calls "my moonlight butterflies". She has learned how to play on a gaming console called Xbox, as well as learned the art of Voice Acting in different accents. Russian, British, Redneck/Hillbilly, Valley Girl, Scottish, and Southern Belle are the accents she is able to do. She live streams on a platform called Twitch.

~ May you all be at peace, and let the moonlight guide you! ~