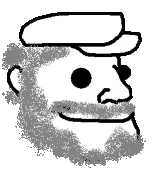 Atelier Bec is the handle of Bec, an American cartoon VStreamer and VTuber. Bec uses video and text to share his cartoons and pixel art, stretching and breathing routines for health and mindfulness, lessons in various skills and study topics, character impressions and voiceovers with a deep bass-baritone. He also uses streams to obtain feedback on 3D VRoid work, Live2D rigging and animation work, and other projects. Sometimes he works on games and visual novel content on stream.

Bec's smooth voice, calm demeanor, and breathing exercises are noted to put viewers to sleep or put them in the zone to lurk and get work done. It's all good with him, so long as people respect each other. He typically streams on Mondays and Wednesdays at 9AM - 11AM US-EST.

When asked for his lore, Bec typically responds in a raspy voice, "I'm just a guy. Don't worry about it." However, the following theories all may explain his black-and-white aesthetic, his ability to regularly go off-model and create things, his low energy, and immunity to most known forms of harm:

At the very least, Bec does not seem malicious. He can be cranky but is quick to make amends if he has upset someone. With his extensive knowledge in breathing exercises and calisthenics, he might know Hamon. Bec has shown a wide range of miscellaneous practical and creative skills, like a jack of trades or character filling whatever role is needed.

It is unknown if the Atelier in Atelier Bec refers to an actual atelier or workshop, where Bec creates things and runs experiments; or if it is a misinterpretation of atelier as a title, as it sounds similar to the title of somelier.