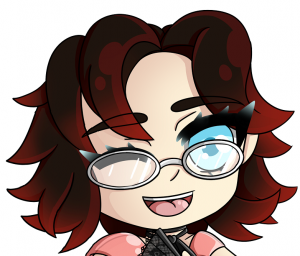 Aria is a Pokemon Vtuber who does hardcore nuzlockes of vanilla Pokemon games and romhacks. She follows standard nuzlocke rules with the addition of dupes clause, no items in battle, no overleveling the next gym leader and playing on set mode instead of switch. She has completed Pokemon Alpha Sapphire and Platinum under hardcore nuzlocke rules as well as reaching the champion in Firered and Emerald.

In the far future, it's possible for one to alter their appearance in any way they see fit. For some this may be perfecting the body they have already, but for others, it means adding something more. Aria Snowsong chose to take on traits of a cat, with ears and a fluffy tail. Though she was a denizen of the far future, her mind often cast back toward the distant past. She wondered not of the reaches of the galaxy or the mysteries of her own time, but how society as she knew it came to be. Through research and careful study, she found a way to send herself into the past to see for herself how life in her time came to be. Though what she didn't know was how far back she would go, or that she would have no way to return.

The preparations were made. All ties to her time were severed. She said her goodbyes to those who she would be separated from in time and space, and stepped through the portal. Immediately she realized how different things were when she found herself in the middle of the ocean. She looked around, frantic. With some stroke of ridiculous luck, a passing cargo vessel found her and pulled her aboard. She hid her catlike features under baggy clothing and a flat cap until the ship reached port, careful not to reveal her origins or knowledge of future events. Once ashore, she began to explore and do research on her new time period, and her life in the present day truly began.