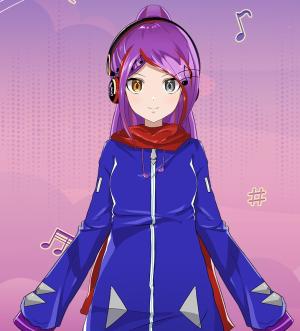 Aria is a trans girl who enjoys playing video games, drawing, and chatting with people. She makes english variety gaming content, including 100% Orange Juice and Pokemon Nuzlockes, and aims for her streams to be a safe place where anyone can go to feel safe, be accepted, and relax.

Aria is the commander of the Bean Bag Army, a group that fights against bad vibes using the power of video games (or whatever they feel like doing at the time). Whilst the member of the Bean Bag Army themselves mostly arm themselves with harmless "weapons" such as small bean bag launchers, Aria herself wields a powerful sword known as Requiem although she only ever wields it as a weapon in self defence as she prefers to resolve conflicts peacefully if given the option. She also loves giant robots and is currently putting any and all of the Bean Bag Army's spare funds into constructing one, although she hasn't made much progress yet.

Requiem is a weapon capable of absorbing negative energy, which is then channeled through it's user and transformed into whatever for they wish. For Aria the energy is released as music, she is capable of projecting sound based attacks that manifest in the form of multicolored music notes. The energy released through Requiem can also be used to augment it's wielder, Aria's main use of this ability has been to grant herself large music note shaped fairy wings which she can use to fly at great speeds. At first Aria needed to be phsyically holding Requiem to use any of these abilities, but extended use has led some of them to become bound to her very being. She is able to manifest her wings with no help of Requiem which has led many people to believe she is a real fairy.

Aria takes get pride in her position as commander of the Bean Bag Army and always strives to spready positivity and good vibes wherever she goes while making sure those around her feel comfortable and safe. It is for this reason she decided to take up being a Vtuber, as it was another way for her to spread good vibes and create a space where people could relax without worry.