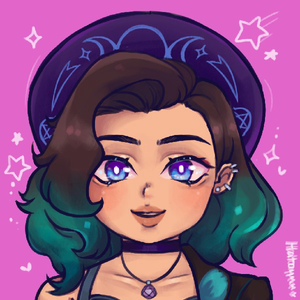 Arcana Sparkles is a Malaysian Twitch streamer and digital artist who is also a VTuber. They stream a variety of games but favor first person shooters, horror games, roguelikes and simulation/roleplaying games.

Headcanon: A cottagecore loving art student falls through a strange portal and makes a deal with an ancient astral crone to inherit her immense magic. With the crone's dying wish and a intertwined drop of mana and blood to seal the contract, Arcana is forged from their two souls. Their new role and alter ego as a witch reignited their childhood dream of being a magical girl.

With their newfound magical powers, they experimented with travelling and wondering through different dimensions. During their adventures, they encountered other potential candidates from alternate timelines that the crone had chosen instead. A coven was founded to help the witches understand their powers more and train together as they had no master to learn from.

Due to the unique shapeshifting properties of the astral crones mana mixed with Arcana's blood, they can shapeshift at will. They are can be found seen presenting as their masculine self (Arcanum), their catgirl self (Periwinkle), foxboy self (Aidan) among others.

During their free time from being an art student, they would play video games, stream or be venturing out into the unknown.