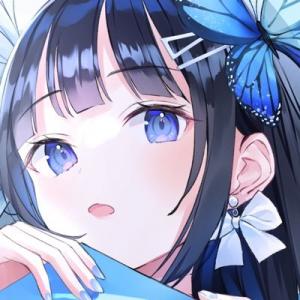 Nabi is an independent Korean female Virtual YouTuber and illustrator who debuted on 2 May 2021. Korean is her native language, she is fluent in Japanese and learning English. Her birthday is 24 May, her height is 159 cm and her zodiac sign in Gemini. Her fanbase is officially called "Nabigators" 「なびゲーター」. She illustrated her own model, while her papa is @KCAUQQ of Iron Vertex. Nabi has also illustrated the designs for VTubers Watson Amelia, Amatsuka Uto, Himukai Kogane, Rena Shiratori, and Tomo-chan. Her content has a focus on art, chatting, gaming, ASMR and music.

Her goals are: getting better at drawing, being good at singing, getting good on both English and Japanese, "what various games do," going to various countries and getting healthy. In addition to YouTube and Twitter, she is also active on Tumblr, Pixiv and Twitcasting. Her surname "Aoi" is derived from the Japanese word "青い (pronounced ah•oee)," which means blue and her first name "Nabi" is derived from the Korean word "나비 (pronounced na•bee)," which means butterfly. She is friends with Amashiro Natsuki, the illustrator of Kamiko Kana, Gawr Gura, Araka Luto and Gokigen Naname.

From a young age, a butterfly who loves Japanese culture and cute characters! I am in preperation to study in Japan!