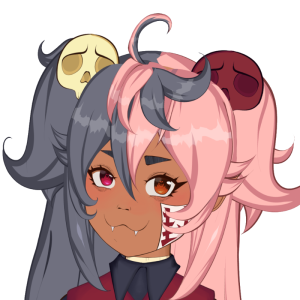 Anna Dazai, mainly known as Chomper, is an English Virtual YouTuber who switched over from Twitch to YouTube in early 2022. They go by any pronouns and makes a variety of content. Usually streaming gameplay, art process, live2D rigging, just chatting, and more. However, recently they announced they want to focus more on horror content!

Hades University is the most prestigious school within the Underworld and only accepts the best of the best; and while Anna may be the best in their class, their behavior is certainly lacking. As a straight A student, Anna is disliked by their teachers and school staff as their unsatisfiable urge to cause trouble and chaos constantly gets them into trouble. So much so, Anna has been sealed and has their powers limited. . . As well as being placed under strict supervision when not on campus.

Death—known as Mr. Deathy by Chomper—was ordered by the High Council to keep an eye on Chomper in order to make sure they are stable enough to continue going to Hades University. Death has taken his role quite seriously and taken Chomper under his wing, becoming almost like a father figure to the vampire. Even letting the young vampire go to the surface when Death has to reap mortal souls—even if Anna was incredibly cruel to the humans they encountered. However, one trip would set Anna on the path towards streaming. As they were on the mortal realm with Death on a mission, Anna broke away to spy on a single human they wished to torment. The human held a small device in hand and seemed to be watching a tiny person on it.

Curious, Anna got a closer look and wanted to know more.

When going back home, Anna found herself researching the name on the human device: "Twitch" and found the streaming service. They binged watched multiple streamers under the guise of studying humans. Who knew the mortal realm still had demons, angels, demon slayers, sharkmen, and other monsters on the surface! While other streamers aimed to entertain their audience, Anna Dazai wishes to corrupt and torment every viewer into becoming a soldier for their world domination plan—Death knows of this plan, but doubts that Anna would go through with it before becoming bored, so he lets Anna have their fun.