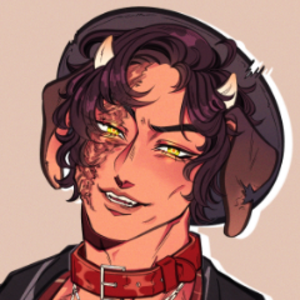 Anarchy is a Storm Hellhound, of the Rottweiler variety. This hellhound loves the horror genre, art, music and playing games whilst maintaining the moral alignment of chaotic dumb and the ability to drink 3 energy drinks in one hour. Anarchy has the inability to take a compliment without threatening to fight someone and/or returning the compliment. He plays a multitude of different genres of games but most notably story-rich and horror have a striking theme in his streams.

Despite being a literal HELLhound, if you give him a game with creepy trees or mirrors, he WILL scream. Anarchy has the mentality of a puppy.

Anarchy was not conceived, nor was he blessed with an answer of just how he came to be. Crafted with the lightning of the highest mountain and stardust from the vast endless galaxy woven intricately with a lost wandering soul of the damned. Who was bound to spend eternity travelling the boundless, barren and lifeless deserts with no end in sight.

Created among the clouds and held by bursts of twinkling orbs of dying gases, Anarchy had the breath of the gods breathed into him. As Lightning sparked in his lungs, he rose. Given life once more, energy renewed and static that danced along his skin in an endless foxtrot. The young hound looked down the all-consuming void, partially littered with stars and endless darkness, and asked:

And the universe responded, for the first and last time. The stars twinkled, black holes breathed and meteors swirled around him. But no voice ever came, the all-knowing, all-consuming universe whispered in his mind. “You are my finest creation.”

With no memory or form to remind him of his previous life, there are times where flashes of his once human life fill his mind. With his soul once more renewed no longer bound by the fates and their fearsome mortal ending shears, it was up to Anarchy to craft his own path.