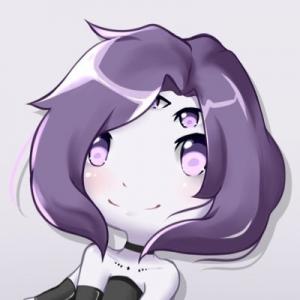 Alura is a Virtual YouTuber who makes content in English and Spanish, including gaming and chatting.

Alura is from an entirely different realm called Khiccas. It's a shadowy realm filled with dark, raining forests and many spiders just like her! (Although maybe a little less mommy-like). Alura is the Queen of her side of the realm, which is split into two major sections- Kuan and Monae. The two sides were split due to moral differences- Kuan likes to enter other realms (like the human realm), and they tend to target the other realm's inhabitants with chaos. Monae (Alu's side!) is quite a bit more friendly and believes in cohabitation with everyone.

Khiccas is inhabited by humanoid spiders, but there are portals to reach out to other realms, as well. Alura holds the key to many portals, and is constantly at war with Kuan, to try and keep a lid on the chaos they cause.

Alura is 436 years old by her own realm, but time moves differently there. She loves streaming because it helps her cross a barrier to meet new people, make new friends, and spread awareness of other living species. The reason Alura was voted to be Queen, and has stayed that way, is because of her fondness of the people around her. She truly cares about others and what they go through. Over 200 years ago, Alu led a movement to break away from Kuan in an effort to help her people understand that evil acts are not the way to live. She didn’t want to be a part of a people that inflicted pain on others, and many followed her. Over time, they made Alu their leader, their Queen.

She had grown up being the oldest of many, many siblings (just spider things), and absolutely loved being a part of a huge family. Taking care of people has always come naturally to her. It’s very common for parental spiders to leave their young after a time, so Alura never had a connection to her parents, but always kept her siblings close. This explains why she holds all of her spiderlings (her followers) very closely.

With her movement into Vtubing/Vstreaming, she’s met many wonderful friends (and new species) that she never thought possible. Between cryptids and demons, devils and wolves, elves and even other-realm spiders, she’s loving the life she lives.