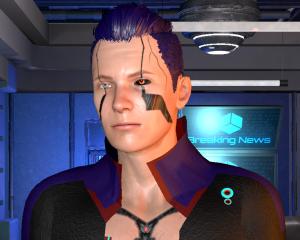 Hello, I am 29 years old from the United Kingdom. I want to tell you guys about an idea I had and maybe with the help of you guys it can become a reality. So I want to do a community-driven story about a guy from parallel earth who has come to this earth to get technology and resources from this world to help destroy the ((cor//po..r/a.ti.on of his w..o/rl..d.)) Incoming transmission low bandwidth multidimensional signal incoming.......... up-link successful.

Hello, my name is Alec Woldt he believes I am a fictional character. I am not my world is a corporate-run hell, I am here to put a stop to their rule and build an army. I have tried to build a time machine to destroy the corporation before they come into power but my attempts to build one kept running me into the same result a machine that would take me into a different dimension sometimes in the same timeline but not always but I have found that a time machine is impossible. there is an infinite amount of earth with an infinite amount of timelines. well, your earth is A131. Your world is the least corrupted so far I have seen relatively speaking and it is the technology advanced but not so advanced that a camera in the street can tell that I am not from your earth. So come and join me and help me to defeat to the corporation of my world and stop corporations in your world from taking over like they did in mine.

Year What Happened
2009 "CredCoin network came into existence (A digital currency in which encryption techniques are used to regulate the generation of units of currency and verify the transfer of funds, operating independently of a central bank.‘decentralized cryptocurrencies such as CredCoin now provide an outlet for personal wealth that is beyond restriction and confiscation’). "

2025 Quantum computer being adapted. (Quantum computing takes advantage of the strange ability of subatomic particles to exist in more than one state at any time. Due to the way the particles behave, operations can be done much quicker and use less energy than classical computers. )

2029 nearly every major corporation in the world accepted CredCoin

2035 "In the year 2035 humans were able to make all-purpose robots that could do nearly anything human could. Governments all around the world started going Fully Automated they were sure that the robots can’t be hacked as there on an offline network not going throw and public networks. Having a 8192-bit encryption they were nearly impossible to hack, from military to civilian population centers "

2050 "Q1: Corporations stopped using fiat currency and started paying everything from good to there personal with CredCoin. Q2: Corporations start there quantum neural injection hack (this hack is an injection into the neural network interface of the robot EG stabbing them in the brain with a needle) on the government robots this hack is placed in several robots and then when they up-link to there closed network this hack uploads into every robot within 10-30 seconds Q3: Corporations and governments start a war called this (1st depression war)"

2053 1st depression war is over corporations won and now own 80% of the world. With governments not having many people and all the robots being hacked they had nothing much to fight with.

2165 corporation find out that Alec has built a machine that can take him into a new a parallel world. They go to where Alec lives and bashes down the door as the door collapses Alec jumps into the MDTM, the leader of the corporation army shouts weapons ready, FIRE. Zap Alec and the MDTM completely vanishes into nothingness.